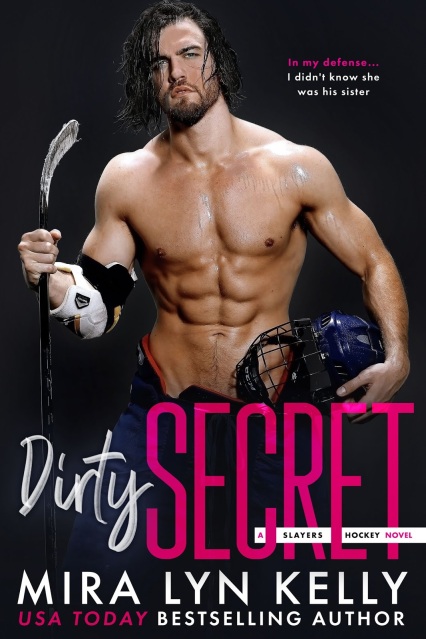 Title: Dirty Secret
Series: Slayers Hockey #1
Author: Mira Lyn Kelly
Genre: Contemporary Romance
Release Date: October 19, 2019
Blurb
In my defense, I didn’t know she was his sister…
“Sexy
and fun with a delicious hockey hero, DIRTY SECRET is great for fans of Elle
Kennedy, Toni Aleo, and Sawyer Bennett. I devoured this book!” -NYTimes
Bestseller Lexi Ryan
This team hates me. Something about my chronic case of resting prick
face and that thing with the captain when the season started.
My fist, his jaw. Yeah, we go back and not in a good way.
Coach says no more “confrontational BS” or I don’t play at all. And
that’s a hit my career in the NHL can’t take.
So the plan is simple. Keep my head down and finish out my contract
with my fists checked.
There’s just one problem.
Allie. The
girl from Vancouver eight months ago. The one with the sexy, shy, and sinfully
bold smile and the sweetest, wettest mouth I ever tasted. The girl who blew my
mind and then blew out of my life without giving me her number.
Turns out she’s the captain’s little sister.
And even though my career depends on it… I can’t stay away from
her.
ADD TO GOODREADS 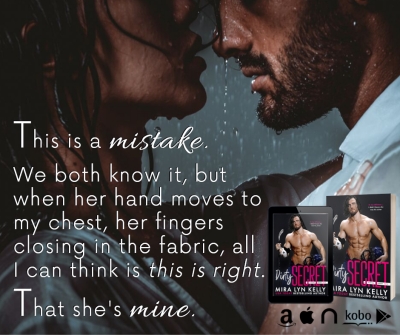 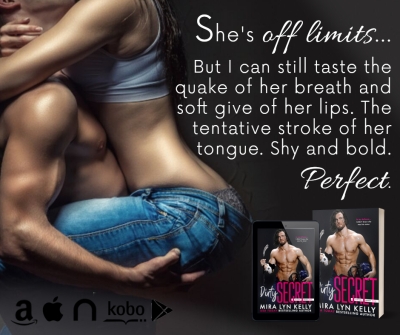 When I get home, I kick my Chucks into the corner
by the closet and look around my empty apartment feeling at loose ends. I don’t
trust myself with the replay of the game I just watched. I can’t handle seeing
Vaughn Vassar looking at me like that again tonight. Not without risking things
neither of us ought to risk.
Closing my eyes, I slowly lower myself to sit at
the stepdown to the living area and try to focus on all the reasons leaving the
bar was the right thing to do. Telling myself that kiss from this afternoon was
a mistake, no matter how good it felt.
So good.
I could be back at the bar in—
Knock, knock, knock.
Sucking in a startled breath, I push to my feet. My
heart speeds as that restless feeling in my belly turns into a kind of
instinctual pull that draws me to the door.
I don’t have to check to know this isn’t my
brother.
It’s not George looking to chat, or Helene showing
up with snacks and office gossip.
Not tonight.
My fingers tingle as I reach for the knob, my heart
races, and my mind empties of all the reasons this is a mistake. Of everything
except the relief surging through my veins as I swing the door open. Vaughn is
braced against the frame again. He’s lost the suit jacket, and his big arms are
flexed and straining as he barely holds himself back.
“I shouldn’t be here,” he says, the words gravel
rough and rubbing against me in ways that only make me want to hear more. “I
don’t even have a fucking excuse to check on you.”
“But you came anyway,” I whisper, drinking him in.
“I came anyway.”
The muscle in his jaw jumps over and again as his
silver eyes swirl with an intensity that matches the energy coming off him in
waves. I shouldn’t be reaching for him, but I don’t think I could stop if I
tried. I want this. I want him. My fingers curl into the gap between the
buttons of his dress shirt and I tug.
There’s a beat of resistance when he pulls back and
our eyes connect—and then he’s launching forward on a growl so savagely
possessive, I feel it through the deepest part of me. That big arm I couldn’t
stop staring at sweeps around me as his mouth crashes against mine in a feral
kiss. This isn’t tender or tentative. It’s desperate and hungry and has me half
climbing his body before my shoulders hit the door he just swung shut with his
foot.
Hands roaming over my thighs and ass, he alternates
between gentle and desperate, stroking one second and gripping the next. Making
me groan around the thrust of his tongue. Making me rock into that thick,
steely ridge lodged between us.
“Allie, tell me this isn’t a mistake.”
I need more of his mouth, more of his kiss. More of
his huge chest pressing hot and hard against my own so I can’t feel anything
but him. “It’s not a mistake.”
It’s critical. Necessary.
It’s my first full breath in weeks, months. “We
just—we just need to get it out of our system. That’s all.”
His nostrils flare, and his eyes burn over me as
his hand tightens in my hair. “I don’t think—” But instead of finishing
whatever he was going to say, he blows out a harsh breath and gives me a single
nod.
And then I have it, the crush of his kiss.
Author Bio

Hard core romantic, stress baker, and housekeeper
non-extraordinaire. Mira Lyn Kelly is the USA TODAY bestselling author of more
than a dozen sizzly love stories with over a million readers worldwide. Growing
up in the Chicago area, she earned her degree in Fine Arts from Loyola
University and met the love of her life while studying abroad in Rome, Italy…
only to discover he’d been living right around the corner from her back home.
Having spent her twenties working and playing in the Windy City, she’s now settled
with her husband in Minnesota, where their four amazing children and two
ridiculous dogs provide an excess of action and entertainment.
Author Links
FACEBOOK
INSTAGRAM
TWITTER
GOODREADS
AMAZON
BOOKBUB
Giveaway