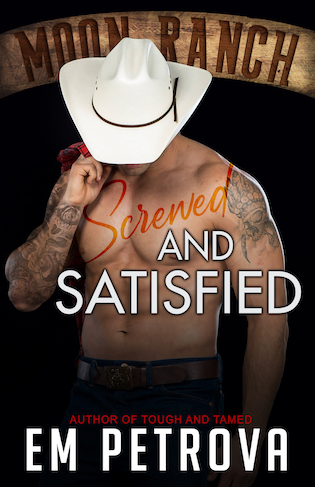 Second chance at romance? Like hell, and definitely not with the girl next door.

Dane Moon is the troublemaker of the family, and his latest screw-up was marrying a Vegas stripper. Or was it that she married the male dancer? Either way, that chapter of his life’s over, along with the marriage. He’s back in Colorado on the family homestead, attempting to pick up the broken pieces of his past, present and future.

When vet assistant Brennah Peterson finds a drunk guy passed out in her hay bale, she isn’t surprised it’s Dane Moon. The panty-melting bad boy next door always had a reputation for being the life of the party. Any torch Brennah used to carry for the rough and tumble cowboy has been long extinguished—at least until he throws that crooked smile her way again.

Wanting Brennah and wanting to be a better man go together like boots and hats, and maybe it’s time Dane cleans up his act. But Brennah’s got every reason to stay away from him, and he doesn’t want another ex-wife anyhow. When things heat up, it’s hard for Brennah to walk away. But a hot roll in the hay with Dane won’t be enough, and she won’t accept less than all or nothing.

Brennah stared down at the big, muscled, tattooed cowboy passed out in her barn. His black hair and the blacker five o’clock shadow coating his jaw gave him a dangerous air.

Speaking of air, she could use some fresher variety. Manure was a treat compared to this guy, who smelled like he’d soaked himself in alcohol and hadn’t bathed since the time of pirates.

Setting a hand on one hip, she contemplated calling the Stokes sheriff to come get him. She didn’t have time to spend on a drunkard—she had animals to tend to before her real day of work started at her veterinary practice. Without looking, she knew her schedule was jam-packed all morning. She’d eat lunch in her vehicle on the way to some ranch calls to see to livestock and then return late in the day to her clinic to treat more dogs, cats, iguanas, and whatever ailing animal came through her door.

Looking at the man curled on his side, she couldn’t help but think she recognized him. His angled jaw and the breadth of his shoulders seemed mighty familiar.

Sometime in his sleep, his Stetson had toppled off and lay a few feet away. The deep, heavy sleep spoke of one hell of a hangover to come.

Feeling a little on the evil side today, she clapped her hands loudly. “Hey! Get up! Hello!”

He moaned and rolled onto his back, giving her a good view of his big, hard body sprawled on her barn floor. The horses were restless in their stalls, eager for their breakfasts, and in the big corner pen, several llamas pawed the floor to show they wanted out to roam the fields too.

Brennah nudged the cowboy’s foot with her own boot. “Hey! You’re trespassing! Wake up!” No matter how loud she yelled, she didn’t get even a flicker of an eyelid in response.

Storming outside, she looked around for a bucket. She located one and filled it with water—cold mountain water from the spring-fed well—and carried the bucket back in. One heave of the bucket and water hit the guy square in the face and chest.

“What? Wha—” He shook his head, but didn’t get up. In fact, he went back to snoring, mouth open.

Brennah stared at him in shock. His blood must be 100-proof if that didn’t do the trick.

“All right. You asked for it.” Her last resort lay in the midsized tractor she used to haul hay bales to her animals. Quickly, she walked outside and climbed into the tractor seat. She started the engine and backed to the open double barn doors.

A glance over her shoulder revealed that the guy hadn’t stirred even at the sound of the loud engine. She set the brake and then leaped to the ground again. After locating a rope, she hitched it to the back. Then she looped the other end around the man’s ankles. To do this, she had to move each of his spread legs, which weighed as much as tree trunks.

She’d seen drunk people sleep this heavily before, and the behavior always scared her. But her annoyance outweighed any butterflies in her stomach that the guy would wake and come up swinging.

Once she had the rope around his booted feet, she stood back to look at him. Maybe this wasn’t such a good idea.

But he was big and heavy, and she had no choice but to drag him out of her barn.

With a shake of her head, she returned to the tractor. Another backward glance and she saw he hadn’t budged.

She put the tractor in gear and rolled forward. The guy bumped along the wooden floorboards. As his body crossed the threshold, she swore she heard a groan from him. Looking back again, she watched his head bump over the lip of the doors and onto the patchy grass outside.

She towed him across the bumpy earth to the water trough and cut the engine. Jeez, this guy was really out for the count, wasn’t he?

When she climbed down, she spotted a small leather object along the trail that had been cut into the dirt by his heavy body. His wallet—and presumably he carried an ID. Though the feeling she recognized him burned strong, she didn’t know the guy’s identity.

She gave him a wide berth in case he woke suddenly and made a grab for her. Then she’d have no choice but to brain him with a shovel.

She walked over to pick up the wallet that had fallen out of his pocket. Propriety told her not to open the bifold and look, but she had to identify the guy, right? She flipped it open and stared at the Colorado driver’s license—expired with a picture of a younger man.

She groaned. No wonder she recognized him—Dane Moon.

Her mind waged a war with her younger alter-ego. In high school, she would have done just about anything to have Dane throw one of his gorgeous crooked smiles her direction, and he never gave her the time of day.

He could only be described as rough around the edges, with a look about him every girl in Stokes High wanted a piece of. Heck, Brennah had her fair share of fantasies involving Dane Moon.

Em Petrova was raised by hippies in the wilds of Pennsylvania but told her parents at the age of four she wanted to be a gypsy when she grew up. She has a soft spot for babies, puppies and 90s Grunge music and believes in Bigfoot and aliens. She started writing at the age of twelve and prides herself on making her characters larger than life and her sex scenes hotter than hot.

She burst into the world of publishing in 2010 after having five beautiful bambinos and figuring they were old enough to get their own snacks while she pounds away at the keys . In her not-so-spare time, she is fur-mommy to a Labradoodle named Daisy Hasselhoff and works as editor to other authors.

You can find Em Petrova at http://empetrova.com

Sign up for Em’s NEWSLETTER
*Never miss a giveaway or sale!
*Receive sales on other books you might enjoy
*Subscriber only giveaways
*Exclusive content
Copy this link and paste into your browser: http://www.subscribepage.com/w4b4s7