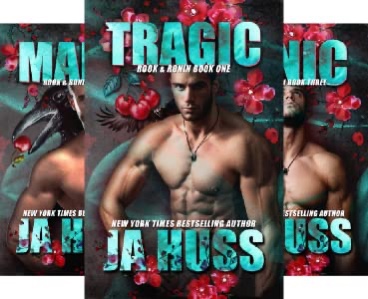 She’s on the run from a horrible past.

He’s got an offer of a lifetime.

Rook Walsh appeared out of nowhere like a dark angel sent to steal my soul. And I could just tell that she was broken, and beaten, and scared.

So I made her an offer of a lifetime. She needed a job and I needed a certain ‘type’ of girl for a modeling contract worth millions of dollars called Tragic.

I was warned to keep my hands to myself.

I was warned not to get involved.

I was warned not to ruin her.

(The way I ruined the last one)

But I don’t take orders—I give them.

Ronin Flynn appeared out of nowhere like a bright light in my heavy darkness. And when he offered me a job, and money, and a fantasy roof-top apartment I wanted to believe that he was good, and fair, and honest.

But I’d been tricked by a pretty face before.

I’d fallen for the knight once—and lost everything.

This was my chance to start over.

This was my chance to escape and be free.

And this was my chance to do it all by myself.

I don’t need a knight.

I don’t want to be saved.

But sometimes you find yourself trapped inside the fairy tale and no matter how hard you try, nothing you do can stop the trainwreck coming.

Tragic is book one of the Rook & Ronin Series and features a runaway girl who falls into a million-dollar dream of cherry trees and roof-top swings. A bad boy with a sketchy history of breaking pretty girls. And a job called Tragic that might ruin everything.

One thought on “FREE!!! First Two Books from the Rook & Ronin series by JA Huss!”