‘HOLY ish!!! I thought I was in love with Tanner and Gabe…but Ezra…I love him and all his broken parts.’ ~ Boys in Books are Better

He’s one of a pair.
Identical twin to Damon.
And an enforcer for the Inferno if one is ever needed.

I knew better than to get involved with him.
With his aggression.
With the constant fights.
With the games the twins were known to play with every woman stupid enough to fall for them.

What used to be a good time is now a tragedy.

Despite all that, Ezra refuses to let go.

*** Each novel in the series depicts a unique romance, but the plots through each book connect in one world. For the best experience, read the series in order.
Nine Dangerous Men. Nine Unrepentant Sinners. Nine Irresistible Manipulators. 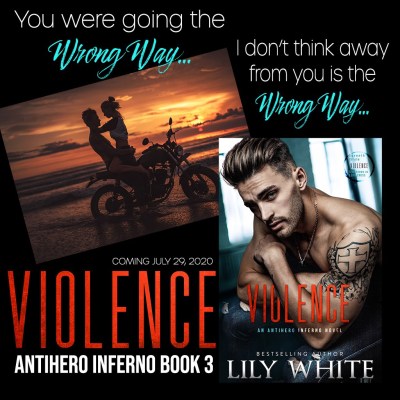 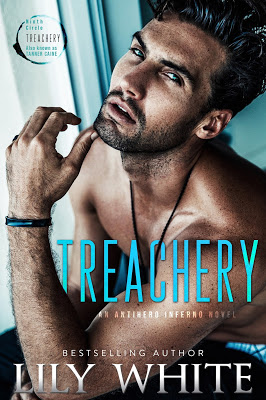 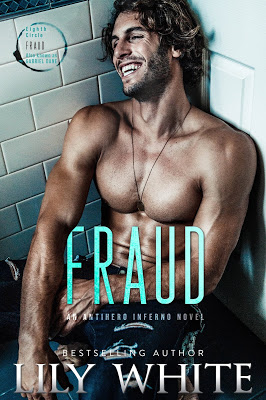 Lily White is a romance writer who likes to dabble on the taboo side of eroticism. She is most known for her Masters Series, Target This, Wishing Well, and Asylum. In addition to dark romance Lily writes contemporary romance, taboo romance, and psychological thrillers. Lily enjoys stretching her writing muscles by continuing to challenge herself with each book she publishes.

Fantastic addition to this thrilling series! This is heavy on the romance compared to the previous stories that had a good amount of intrigue and mystery. Emily has been one of the girls from the beginning and now we get to know her and the backstory with the twins. And the twins! The sexy duo of Violence and Anger that is the Cross identical twins. Always ready to fight and run a switch of identity. These two have been a sad, tumultuous part of the Inferno hunks from the beginning with their horrible father and his brutal actions. It’s no wonder Ezra and Damon use their fists to do their talking. The only one that can tame their violent tendencies is Emily. The good girl persona is just a facade. She’s really a fiery, strong woman that loves both the twins. There’s sexy heat as we get some MFM action between the three. The romance so emotional and beautiful as Emily knows which one she wants but walks away to avoid hurting the other one. Ezra won’t let her go and forces the issue in a dominant way that results in panty-melting hotness. I can imagine this was a hard one for the author with the twins each having their own story, plus Emily’s fiancé is Mason and his story is the last story. We get a couple at the end but there are still a lot of questions about how it’s all going to turn out. Toward the end the mystery kicks back in with the elusive Everly making a surprise appearance, Brinley shows up in a strange place, and a bad man meets his end. I love the way these stories have parallel plotlines and timelines with new twists revealed and some answers along with new characters popping up. Brinkley’s friend Ames is interesting and could be a love interest for one of the guys. I love this author’s work and this series is outstanding. We’re only a third of the way in and the mystery is tangled and twisty and the romance is hot. I can’t imagine how it’s all going to end with this new generation of Inferno alphas trying to take down their fathers and control the empires. Terrific intrigue and swoon-worthy romance with the cruel, beautiful men of Inferno and their women.