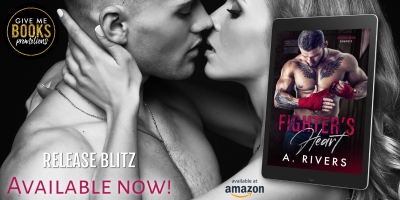 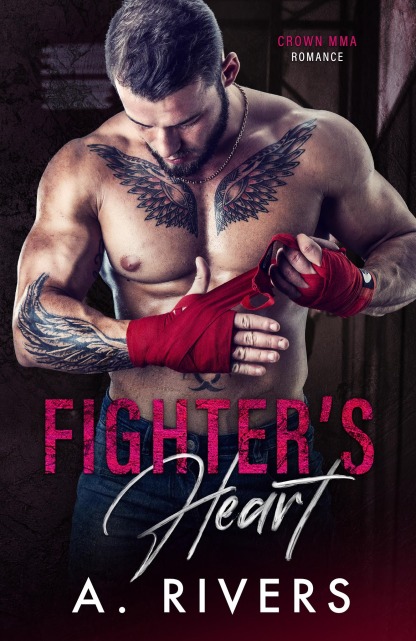 Title: Fighter’s Heart
Series: Crowne MMA Romance #1
Author: A. Rivers
Genre: Sports Romance
Release Date: December 7, 2020
BLURB
Lena
I never meant to become the go-to P.R. girl for the biggest jerks in professional sports.
Unfortunately, I built a reputation for turning douchebags into superstars, and now I’m stuck.
When I’m assigned to work with a guy accused of hitting his girlfriend, enough is enough.
I know all about men like Jase ‘The Wrangler’ Rawlins, and I have the emotional scars to prove it.
Mouthy, conceited, and hot as f*ck, he’s used to getting his way.
I want nothing to do with him, but my boss makes an offer I can’t refuse.
My dreams are finally within reach, and the more I get to know Jase, the more I wonder if I’ve gotten him completely wrong.
He may be bossy and infuriating, but he’s hiding a heart as massive as his ego.
Can I let go of the past and trust the feelings growing between us when my career is on the line?
Jase
Trouble is nothing new for an MMA bad boy like me, but this time I’m in too deep and can’t get out.
At least, not without help.
That’s where Lena LaFontaine comes in.
All buttoned-up blouses and ass-hugging skirts, she’s a distraction I don’t need, but she’s also the only one who can make my problems go away.
She wants to hate me. I’m not going to let that happen.
I never expect the way I ache to taste her pouty lips and claim her for my own.
My life is on the verge of imploding, and when it does, I’m not sure if I’ll emerge as a champion or be imprisoned for a crime I didn’t commit.
I won’t drag her down with me, but when push comes to shove, I don’t know if I can give her up, either.
Fighter’s Heart is a standalone MMA romance with a cocky alpha hero and a sassy heroine who knows how to keep him in check. It has a HEA, no cheating, and no cliffhanger.
ADD TO GOODREADS 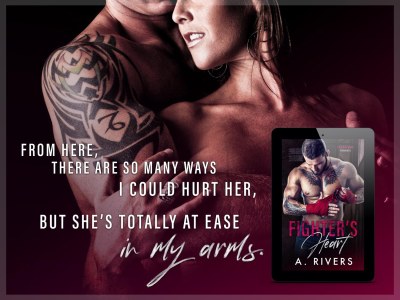 A. Rivers writes romance with strong heroes and heroines who kick butt and take names. She loves MMA fighters, cops, military men, bodyguards, and the protective guy next door who isn’t afraid to fight the odds for love.