“This is a dangerous, forbidden love mafia story, and it is INCREDIBLE!” ~ Beyond the Covers Blog

“This has to be one of my most favorite Dark Mafia books to date. There is spice like you wouldn’t believe and the chemistry between these two just burns up the pages.” ~ more.books.forever

Vasili Nikolaev.
Dangerous. Deadly. And most of all, devastating.
He’s the king of New Orleans.
Ruler of the Russian mafia and my best friend’s oldest, mouthwatering brother.
On Halloween night my last year in college, I gave him everything. My body. My heart. My soul.
He burned it all to the ground with the first ray of dawn.
Lessons learned. I’ve moved on. Now, five years later, I have a career I love, a boyfriend. But Vasili is back in my life again. A temptation I don’t need.
One thing is for certain. Nikolaev always settles the score.
He’ll destroy everything and everyone, including my boyfriend.
The question is… What is Vasili’s end game?
Will he destroy me all over again or will I be the Phoenix rising from the ashes he left behind and take what I’ve always wanted? Him. 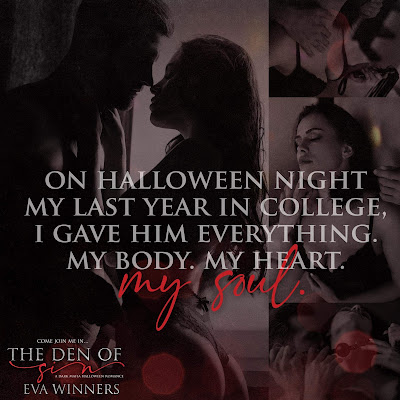 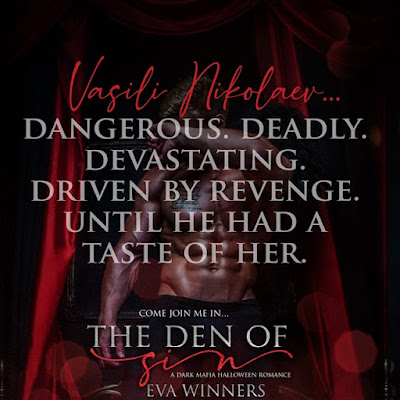 Eva Winners released her first novel Second Chance At Love in 2020 and has been writing vigorously ever since. She writes about everlasting romance for every century focusing on characters emotional development and always guarantees an HEA.
She loves yoga, wine and her kiddos. In her spare time, she seeks adventures either hiking through trails or exploring the beaches.
Writing books has always been her passion and she brings real life to the forefront in everything she writes about.
Deeply passionate characters and stories will draw you in and you’ll never want to leave.
Follow her on social media to stay up to date with all her new releases!

MY REVIEW:
This is a thrilling mafia story full of secrets, treachery, revenge and deadly deeds, plus a sizzling romance. This starts out hot with the Russian boss Vasili and his sister’s best friend Isabella getting cozy. Bella’s had a crush on Vasili from their first encounter but she’s not ready for the heartache he dishes out. Vasili thinks he’s avenging his family but time will tell as secrets are uncovered. Poor Bella moves on and tries to put Vasili behind her but he just won’t go away. The chemistry between the two jumps off the pages and it’s hot! Isabella is a terrific heroine and grew stronger as the story progressed but stayed true to herself. Sweet, smart with a huge heart. I loved the bad boss Vasili. Cold, hard and brutal. He went a little soft toward the end for me and some of his behavior didn’t seem like a 45 year old man, but overall he’s a full on mafia boss. These characters are tangled together in secrets and lies and there’s a big twist with Bella. This is an easy read that was a little up and down for me. Some brutality but not as harsh as other mafia stories I’ve read. The romance was steamy even with the 20 year age difference. There are a lot of characters in this story as part of the Belles and Mobsters series. I look forward to more of this series and these characters especially the tortured Alexei.