“This book was heartbreaking at times but sure kept me on the edge of my seat. I have loved this series and can’t wait for more..” ~Doris

“…the story is raw and painful to read at times. D.M. is going to break your heart, give you little tiny hopes and have you begging for Nicholas to make it out of this situation so he can fight for the things he deserves.” ~Pam 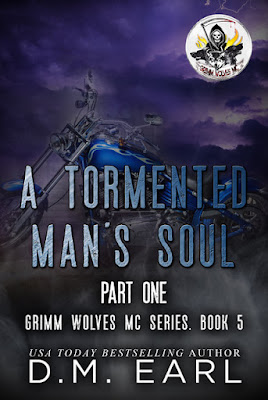 Feared by most, except his brothers in the club who think they know him, Nicholas “Chains” Bruno has many secrets hidden so deep he is tormented by them. Isolating himself, the solitude and loneliness is weighing him down and Chains doesn’t see a way out of this hell. As the Grimm Wolves MC Enforcer, he needs to keep up the persona that has taken years to cultivate. But deep down in his soul there is only one, no two, things he craves day in and day out and feels he can’t have: the two people who love and accept him for who he truly is. Chains continues to try to fight to mesh his two worlds together, giving in to his ultimate dream—only to push it away when they get too close—hurting the ones who love him the most. He knows once the MC world discovers he is not what he appears, the only thing that has been a constant in his life for years will be in ruins and he’ll lose his brothers, the club, and end up truly alone.
Adding to his torment, an unexpected enemy decides to make a move when the Grimm Wolves MC least expects it. The end result devastates the club because Chains is snatched, and his brothers don’t have a clue who has him or why. Trying to ride on the right side of the law, the club still has many allies on that other side who they reach out to for help. However, that one secret Chains has kept close to his heart is slowly being revealed as mystery items are being delivered to different MC clubs. With his brothers curious and the club fighting to find Chains, two people step up knowing that now is the time to share Chains’ double life with the club. Once they come out to the Grimm Wolves, Chains’ story takes a different path that no one saw coming.
Will the club be able to find Chains? Can he hold on and survive the constant abuse at the hands of unknowns who enjoy making him suffer? Worst of it all, Chains has no idea who they are or what they truly want. As he remembers all the wasted years, and the few and far between moments of true happiness when he let his walls down and just followed his heart, all he can do at this moment is continue to fight to get back to the two who mean the most to him and something he hasn’t done in forever. Pray. 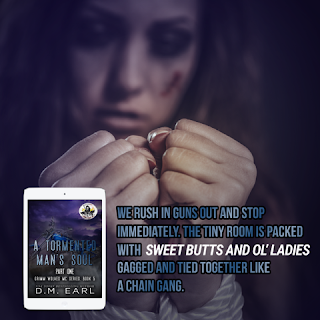 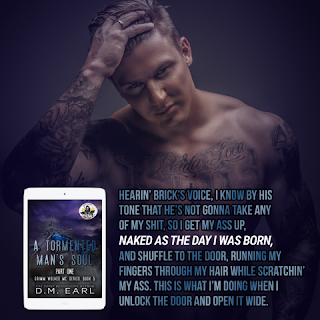 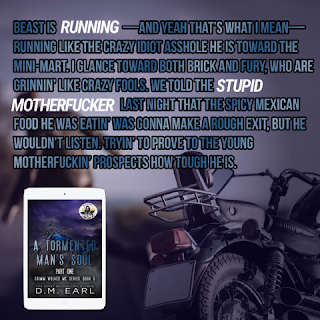 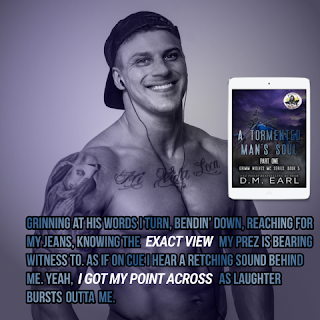 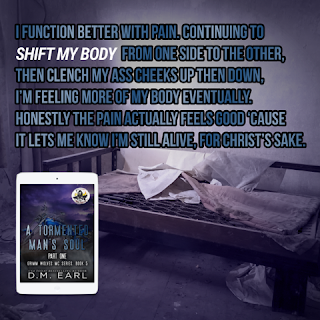 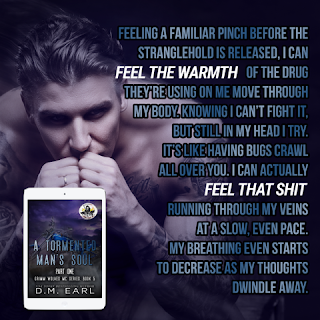 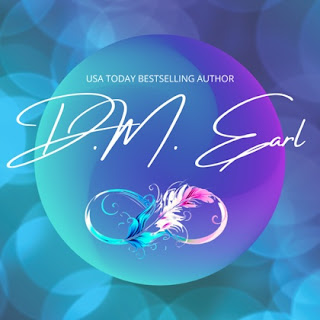 D.M. Earl is a U.S.A. Today Bestselling Author who spins stories about real life situations with characters that are authentic, genuine, and sincere. Each of her stories allow the characters to come to life with each turn of the page while they try to find their HEA through much drama and angst. D.M. finds ideas for her next story from within those around her and what she experiences in daily life. Each book has a part of her left behind in it. She lives in Northwest Indiana married to her best friend who was instrumental in the start of her writing career in 2014. When not writing D.M. loves to read, play with her seven fur-babies (yeah crazy) and ride her Harley Dyna Lowrider.
“Enjoy this Ride we call Life.” Remember we only get one chance.

MY REVIEW: Wow! This was brutal and not for the faint of heart. I love a gritty MC story and this one is that and so much more. The Wolves Enforcer, Chains has hidden his romance relationship for years but it’s out when he is kidnapped and pictures arrive to out him. Yup, he’s in love with a woman and a man. His childhood friends from an abusive foster home are with him in a polygamous relationship. Holy cow, those were some tough scenes as these youngsters were tortured in a house of pain. We learn all about Chains past that filled with horrific torment from foster homes to the street to prison where a couple of brothers show him a different way of life. MC brotherhood. The Grim Wolves are his salvation along with his loves, Winnie and Jackson. The love between the three is so evident. Everything is turned upside down when Chains is kidnapped and tortured by unknown assailants. It’s gruesome and goes on forever. We met a new character in a captive named Wilder that has a tie to Chains. There’s a lot of mystery and intrigue around the kidnappers and villains behind Chains’ captivity. It’s a grim hunt for Chains when the club pulls in favors to find him. Chains was in his head a lot of the time with flashbacks of his past. Some of it was repetitive for me and bogged down a little. The pain and torture was horrifying and cringe worthy. Just when the paced picked up and the end was it sight things upended with a huge cliffhanger. Ugh! I wasn’t expecting that. I really liked this group of brothers and their family as the club moves to a more legit side of business. This was a dark story with a brutality that was painful to read. I loved the romance, even though there wasn’t very much, between Chains, Winnie and Jackson. I look forward to the next installment in this gritty MC series. Worth the read!