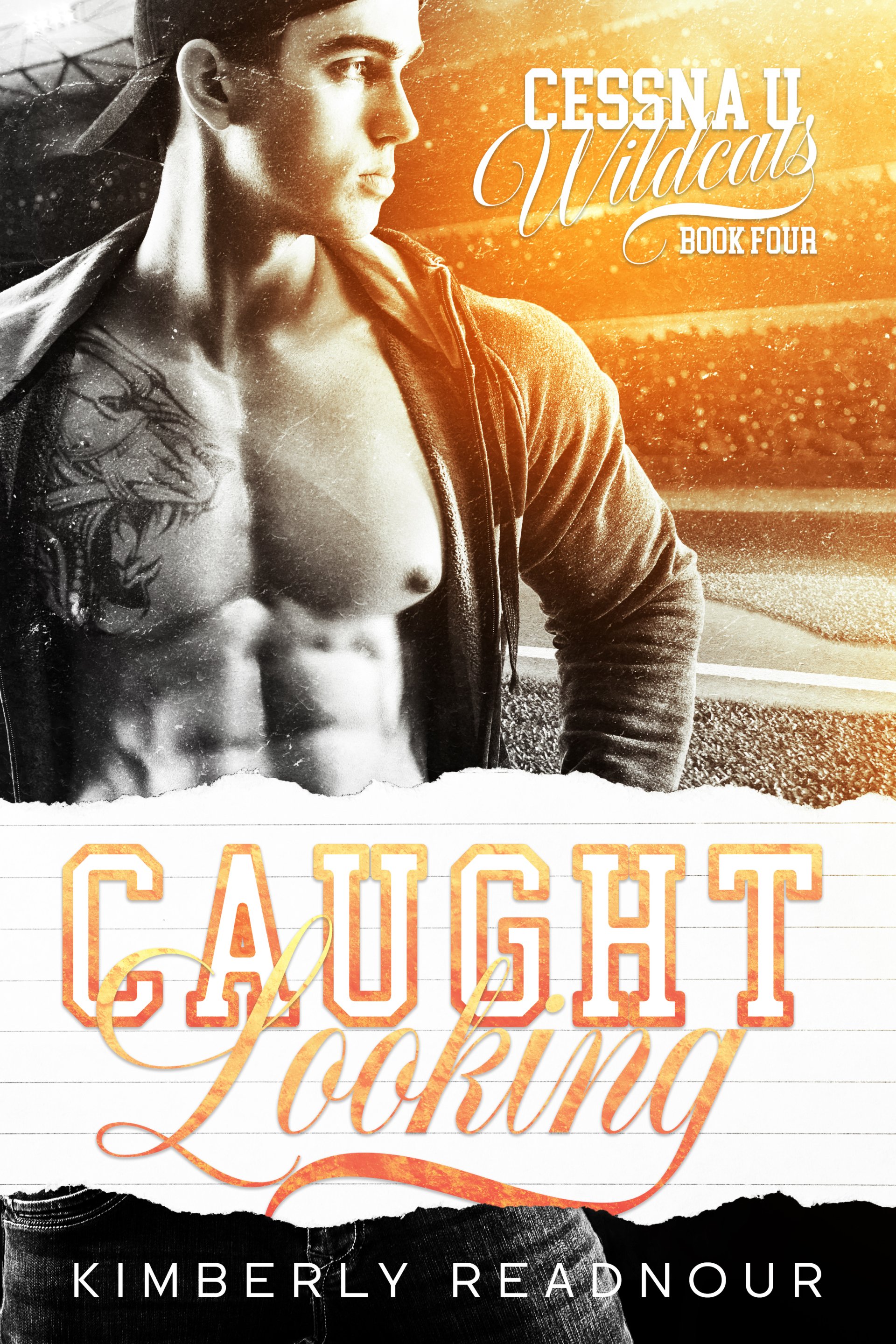 What happens when the girl of your dreams turns out to be the one who could destroy them?

With the sting from not being drafted still fresh, Dalton Boyd gets sent to the strictest coach with the most rules in summer league ball.

Was it mentioned the coach also serves as his host family? No? Well, everyone knows the player staying at the coach’s house has the most brutal regime.

But here’s the thing.

Dalton wouldn’t be in this situation had he not followed his heart and ended up ghosted. As much as he’d like to change the past, he can’t.

So, he sets a goal to stay out of trouble long enough to get through this summer and impress the coach and scouts.

It’s an obtainable goal. Or so Dalton thought until walking into his coach’s home and seeing the reason for rule number one—don’t touch the coach’s daughter—is none other than Cassie Greenburg, his rule follower ghost.

Book four in the Cessna U Wildcat series, Caught Looking, is a forbidden, second chance, stand-alone, sports romance. If you like sexy, hot baseball players, click to add Dalton Boyd! 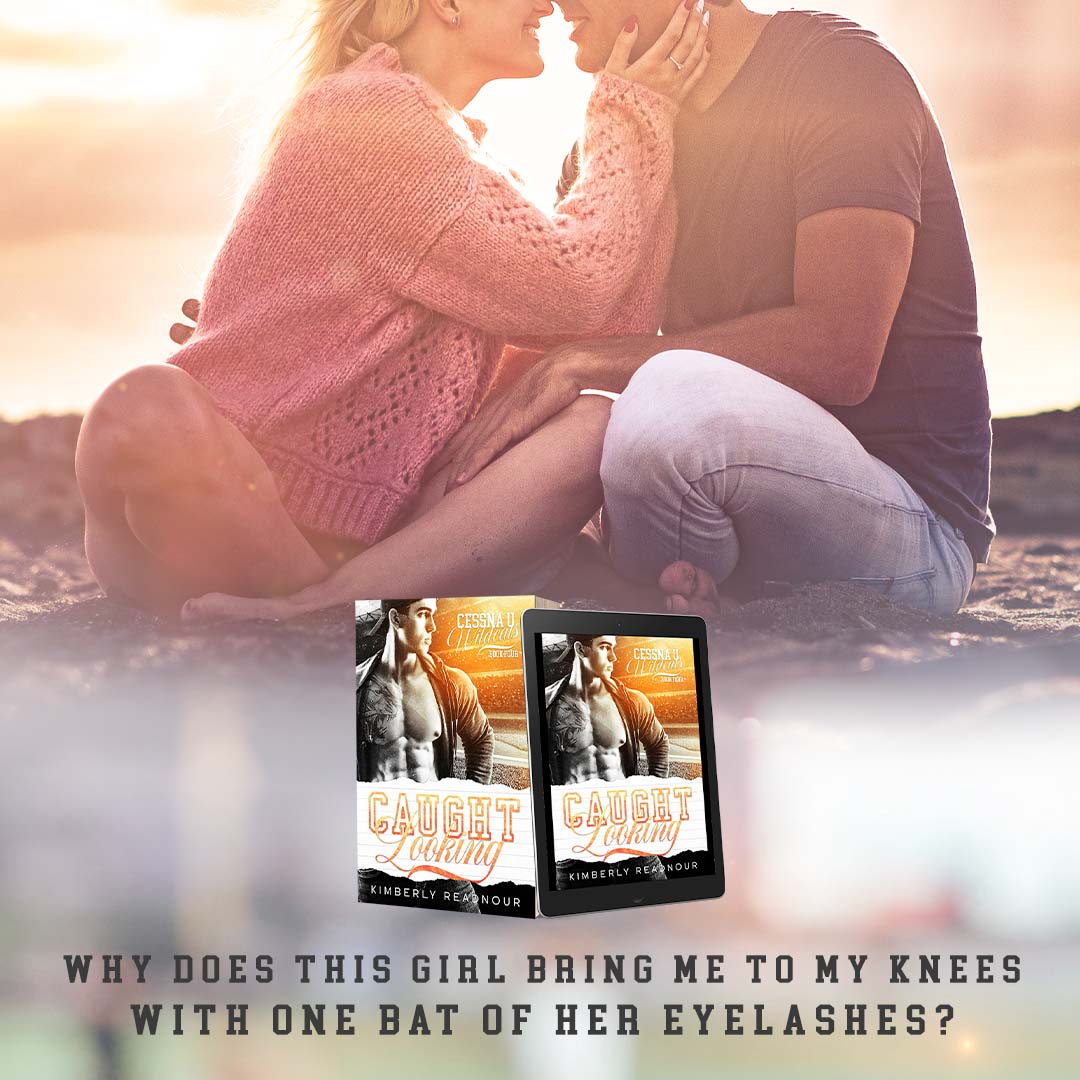 I tighten the beach towel around my waist, determined to rectify my hair’s hot mess with a long, hot shower. As I swing the bedroom door open, Bellow darts between my legs, tripping me forward right as Dalton steps from the bathroom.

A small yelp escapes, followed by solid, muscular arms steadying me. I suppress the second whimper as my gaze takes in that rock-hard body. Mother of all things holy, he’s hot. My focus shifts from his tattooed arms to the towel draped low around that glorious waist that I remember so vividly in my dreams. My eyes continue to climb up his body. Dalton’s still fit, but more defined than I remember, maturity agreeing with him. I’m familiar with the ink sleeving his arms, but the wildcat tattoo covering his right chest is new. It takes great effort to restrain from tracing the animal’s outline with my tongue. Goodness, I want to eat him up.

His deep voice pulls me to those dark, brown eyes. A water droplet falls from the wet ringlets framing his forehead and lands between us on the floor. The sound I make may resemble a yes, but I really don’t know. I’m so mesmerized by his presence my mind keeps reverting to when his body hovered over mine. I itch to reach out and touch him. To let my fingers wander over his defined muscles.

Dalton steps forward, backing me against the door. His clean scent encapsulates me and smells like temptations and memories. He presses a hand into the wood panel above me, leaning in farther. I’m not quite caged in—there’s enough distance between our bodies for me to slip away—but my restraint weakens as heat licks my core and shivers race down my spine.

“Cassie.” My name is a whispered plea on his tongue. The back of his fingers brush against my cheek ever so lightly, and holy moly, that touch conjures every intimate moment we shared as memories slam into me. Like how my heart raced when his lips touched mine for the first time. Or the wetness between my legs when he walked into his bedroom wearing nothing but a towel—like what’s happening now. Or the slight pinch of pain followed by a fullness when our bodies joined in a way meant for two people. Summer lust or summer love? The answer doesn’t matter because the feelings were very real.

There’s so much I want to say, but his intense stare has me so tongue-tied I can’t think straight. Desire may spark in his eyes, but it’s at war with the anger radiating off his body. No doubt, the unspoken question as to why I ghosted him weighs heavily between us.

If only I could explain that my only goal was to avoid this exact scenario—him and me together in front of my dad. If Dad witnesses even the slightest fraction of attraction between Dalton and me, he will end Dalton’s baseball career. Whatever we felt toward each other had to be put on pause. Dad will never approve of him. He may stand at the pulpit and preach about being nonjudgmental, but Dalton’s the exact type of guy he judges. Tattoos and bad attitudes feed my father’s prejudices. It wouldn’t matter the cause behind said attitude. My dad is the most judgmental person I know. Once I learned Dalton’s desire to play college baseball, I knew I wouldn’t be good for him. I knew the harm Dad could bring. And I knew one summer was all we could have.

“I found you.” Dalton’s breathy voice pulls me back to the present—back to him. But something’s off. His gentle touch doesn’t match his defensive stance.

A pained look flashes in his eyes as he battles the demons haunting him. This is all my fault. If only he knew why. His gaze dips to my lips as if he wants to kiss me, but his body is stiff. It’s as if he’s preparing for war—a battle he feels the need to fight. I struggle for the right words to defuse the bomb. But what I really want him to do is close the small gap separating us and claim my mouth. I’ve missed the feel of his lips on mine. I’ve missed the dominating way about him that made me feel special.

A small bark followed by nails scraping against wood alerts us to Bellow racing back down the hallway. Dalton heeds the warning and backs away a moment before Dad comes into view.

My back stiffens at the way Dad’s narrowed eyes take in Dalton’s proximity.

“Am I going to have to send you packing?” Dad asks.

Dad’s lips tighten to a thin line as he peers at Dalton. It feels as if an eternity passes before he speaks. And when he does, his tone holds more warning than the actual words. “Don’t parade around in a towel.” Then his gaze snaps to me. “Either one of you.”

I want to die from mortification. My cheeks flame. I can’t remember a time I’ve ever been this humiliated.

“Sorry, sir. I’m not used to a lady being present. It won’t happen again.” Dalton nods and steps to his door. He doesn’t look back as the door shuts behind his tall frame.

Dad stares straight at me. “Don’t make me regret my decision.”

“I won’t. Bellow had knocked me off balance. Nothing more.”

Dad’s nostrils flare. “If you need to switch rooms with me—”

“Dad, it’s fine. You wouldn’t be comfortable in my bed. Your back would scream at you after the first night.”

His jaw clenches, but he concedes and stalks down the hallway without another word.

Who would have thought I’d be so grateful for not having an orthopedic mattress? But here I am feeling exactly that. I glance at Dalton’s door.

How on earth is this going to work? 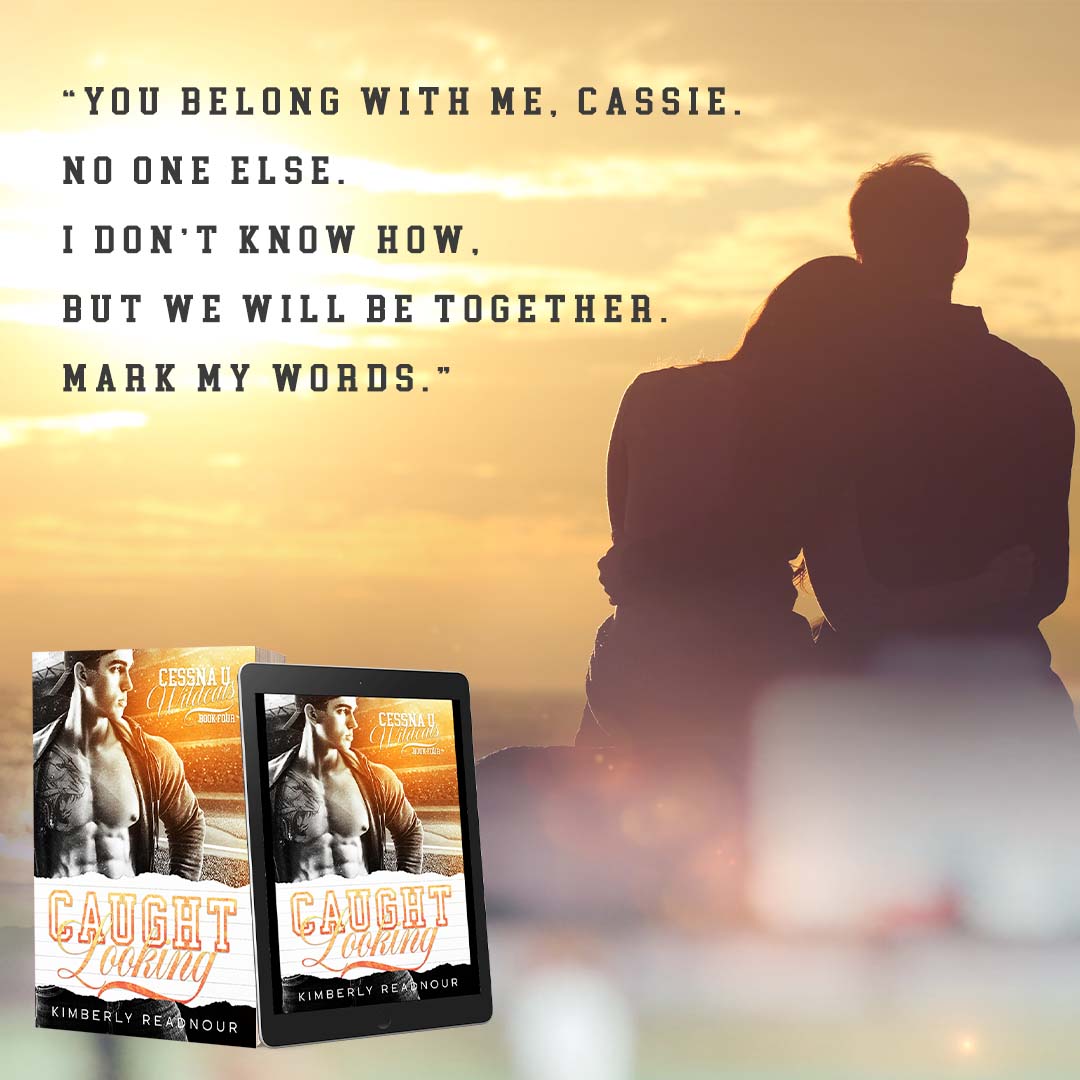 One of Five eARC’s for Caught Looking

Other Titles Within this Series 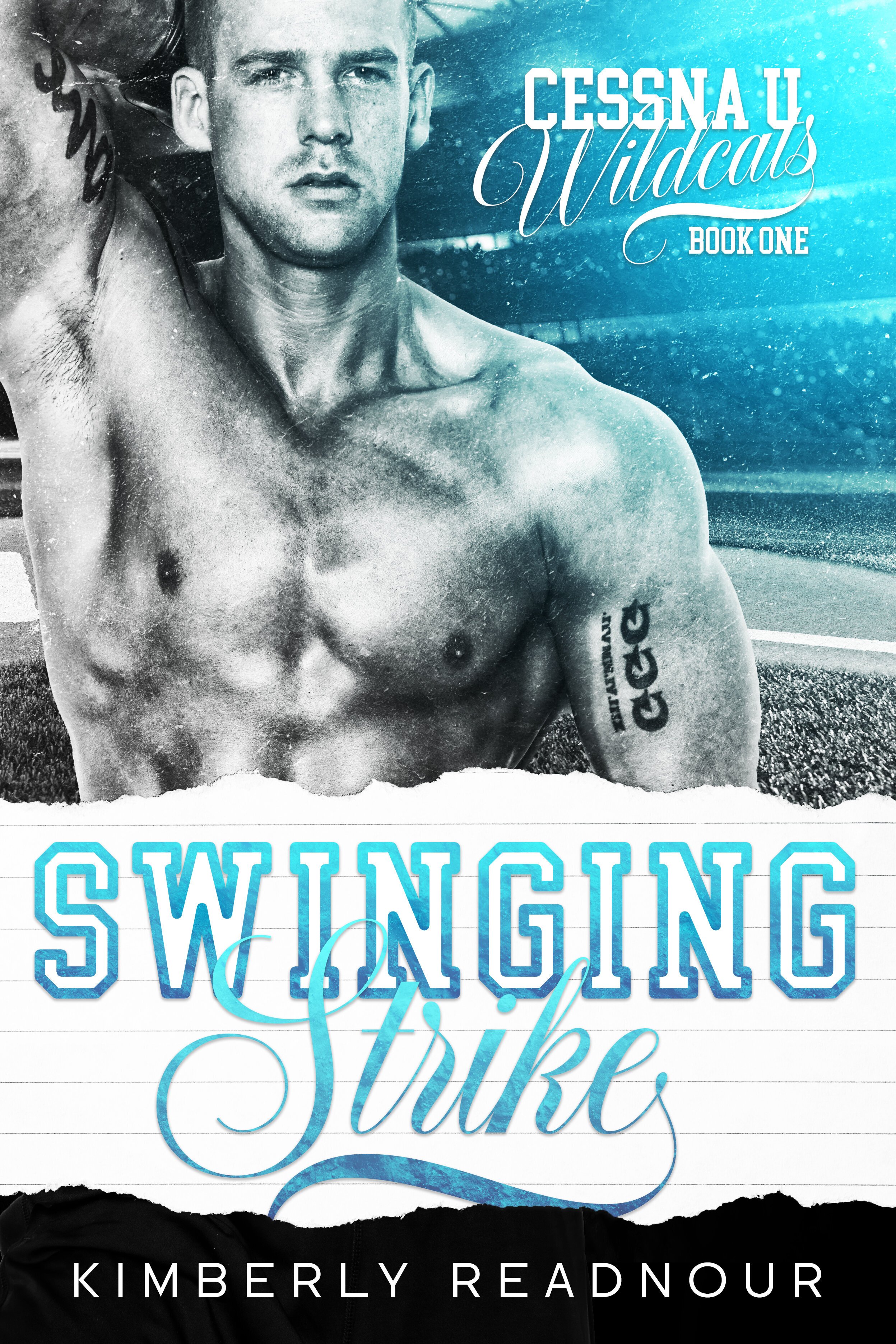 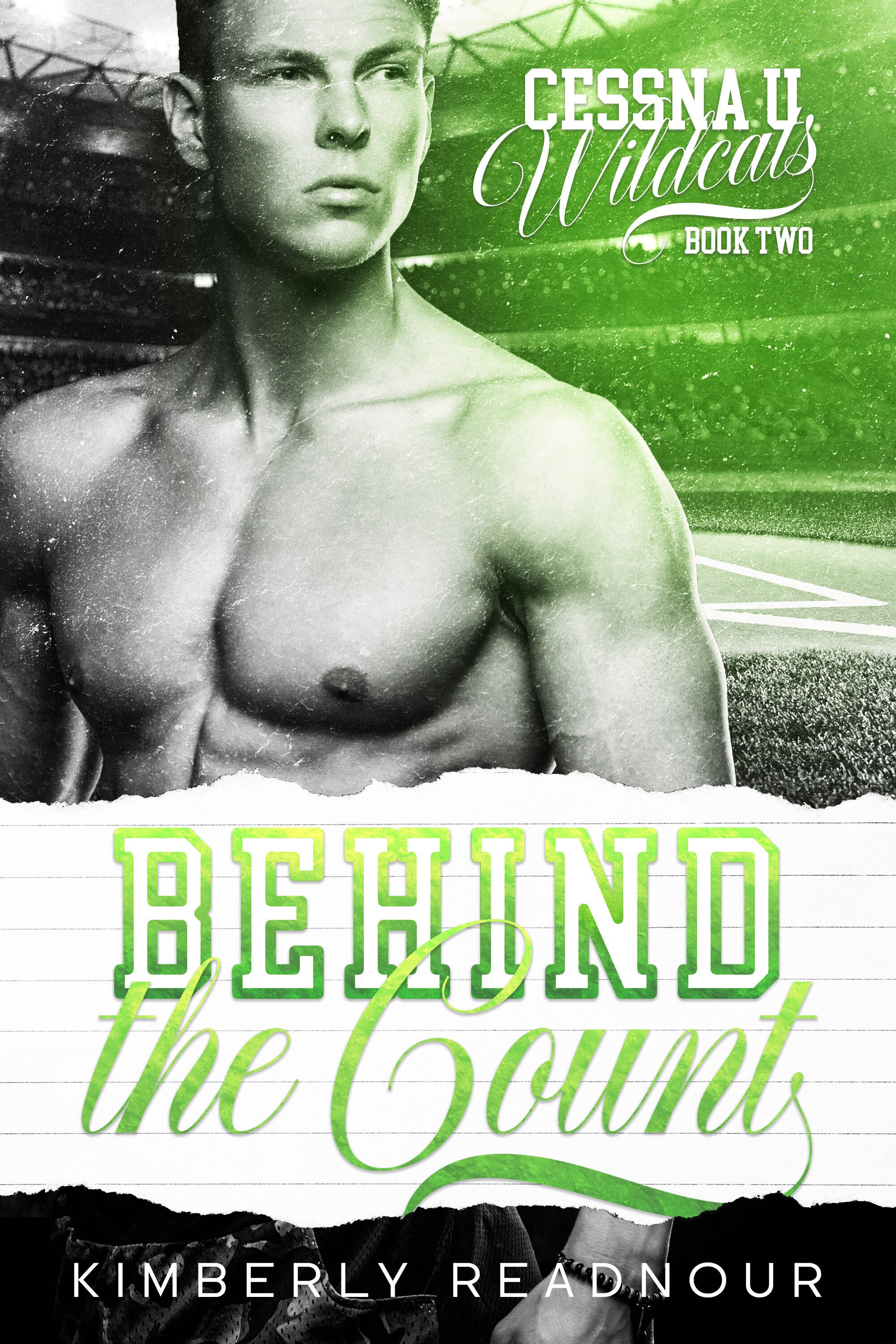 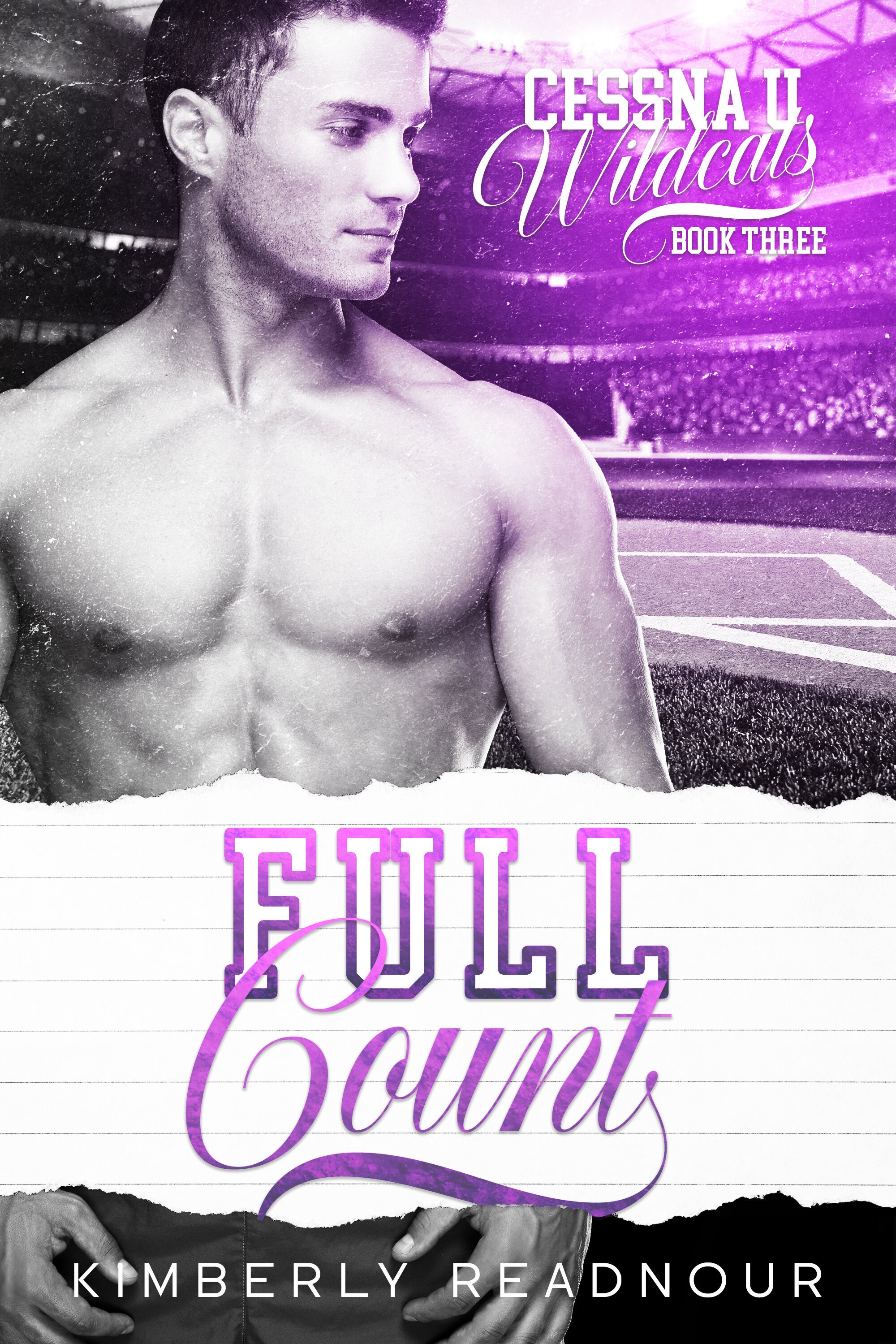 
Kimberly Readnour lives in the Midwest with her husband, two children, and a very fluffy cat.

Having a true passion for romance and HEA’s, she took the leap from the young adult genre to romance and never looked back.

Unexpected Love, book two of the Unforeseen Destiny Series, is a #1 Amazon Kindle bestseller in the Medical Romance. Her series, the Bad Boys Redemption, has spent many weeks on the Amazon’s sports fiction bestseller’s list.

Kimberly worked as a Registered Nurse for fifteen years before hanging up her stethoscope. When she isn’t running her own business, you can find her tucked away writing.