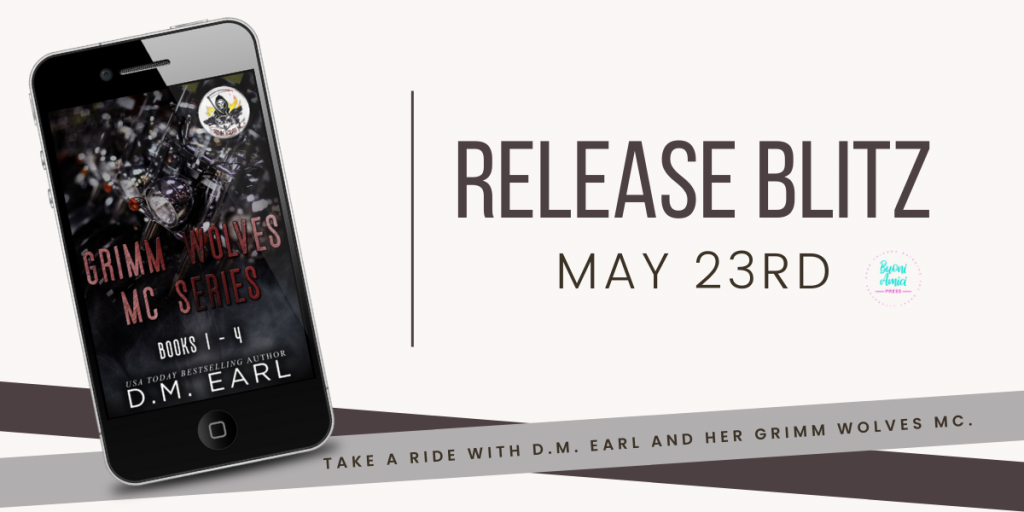 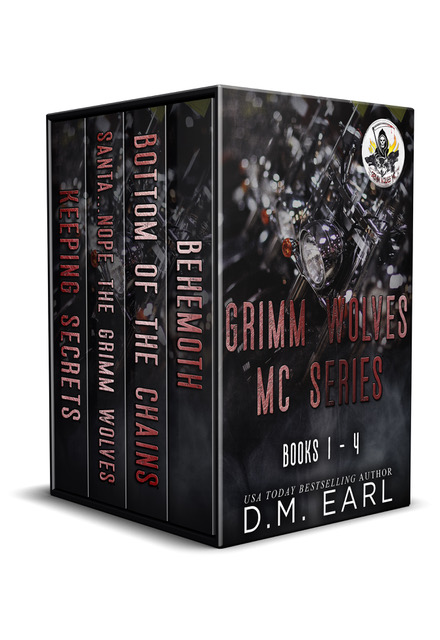 Take a ride with D.M. Earl and her Grimm Wolves MC. Start with this box set which includes Books One through Four.

Members-Prospects-Their stories show that family is not always the one you’re born in.

‘Live and let live—ride ‘til ya die—brothers not of blood but of the club.’

Meet the Grimm Wolves MC and see why you shouldn’t always judge a book by its cover.

How does a man live two lives? One with honor as a firefighter and the other questionable as a Nomad in a Motorcycle Club. Add into the already confusing mix an unbelievable skill set that allows him the uncanny ability to absorb other’s thoughts and emotions. Francis M Stein aka Stitch is surviving the best he can with the hand he has been dealt. He has found an extended family in his brothers in both his firehouse and MC.

My life has sucked for as far back as I can remember. My folks didn’t want me so I was thrown into foster care. Let me just say lots of fun. NOT. Then one day, my life took a dramatic change. My circumstances improved greatly. I met The Grimm Wolves MC and they took me under their wing. I became not only a prospect but also part of their brotherhood.

What happens when your past pounds on your door and you lose the little control you have over your own life? Cesar ‘Beast’ Ironhorse struggles with which road to take when a new threat storms into his life. As he is blackmailed he needs to find a way out not only for himself, but also for his family, who he has sworn to protect. As luck would have it his well-intended play goes to crap, so Beast involves his brothers from his club the Grimm Wolves MC.

An honorable man: soldier, lover, father, and friend. How did this happen? When did the lies begin? How can one man be expected to keep them all straight, even knowing the consequences deep down to his soul if he doesn’t?Lenny ‘Iron’ Fensley realizes each day is truly a gift in his world. Not only is his life but also the lives of the two most important people in the world, his baby girl and the woman he loves, are in constant danger? A danger he never saw coming when he was doing his duty serving his country.

Wow! Brutal and not for the faint of heart but what I love about gritty MC stories with a group of fierce brothers and their hard won path to love. These stories will knock your socks off with the intensity and darkness as the brothers meet and win the love of their women. It’s not easy or light but so satisfying when they get their happy ending. I love the loyalty and brotherhood of the club as they support each other and stand strong when challenged. These guys are what I expect when I think of hardened MC men and the life they lead with their club coming first. The women in the stories are absolutely fabulous even when they’re not always sure the MC life is for them. Each different but utterly defenseless when it comes to their man and the love that surpass all. Tons of action, danger and brutal violence takes it to another level plus there’s a bit of mysticism with one brother having special skills. You can’t beat this series for gritty MC stories. Not to be missed!

D.M. Earl is a U.S.A. Today Bestselling Author who spins stories about real life situations with characters that are authentic, genuine, and sincere. Each of her stories allow the characters to come to life with each turn of the page while they try to find their HEA through much drama and angst. D.M. finds ideas for her next story from within those around her and what she experiences in daily life. Each book has a part of her left behind in it. She lives in Northwest Indiana married to her best friend who was instrumental in the start of her writing career in 2014. When not writing D.M. loves to read, play with her seven fur-babies (yeah crazy) and ride her Harley Dyna Lowrider.

“Enjoy this Ride we call Life.” Remember we only get one chance.