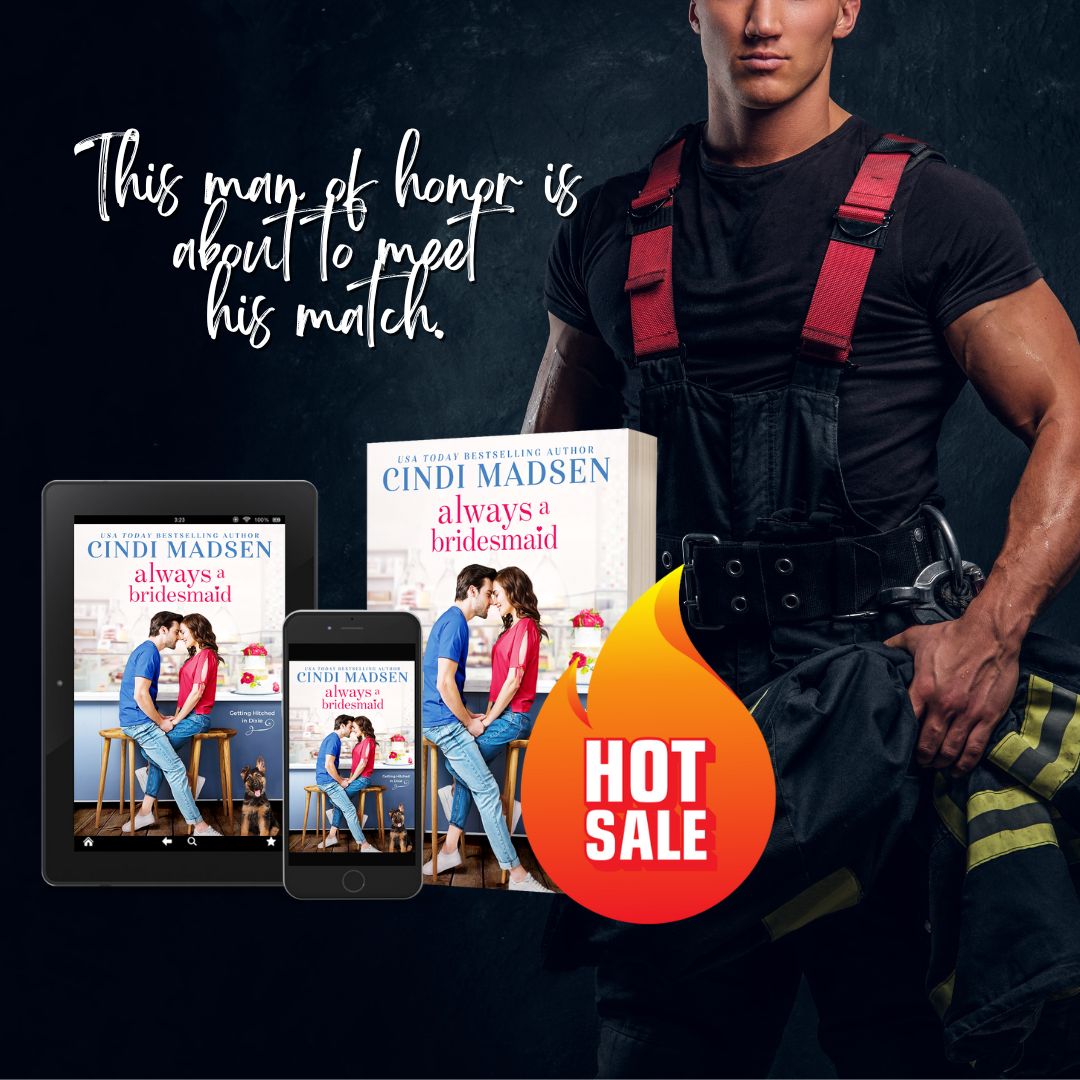 He’s playing a bridesmaid for the first time. She’s practically an expert. Throw in a litter of puppies, small-town hijinks, and a fire, and the wedding of the season just got that much hotter!

Time to get awkward with me, Violet, and Ford!

Violet sniggered at her own joke and withdrew the paint swatches she’d picked up from Martin’s Trading Post, along with a pen. She placed the gradient color cards against the formerly white wall of the bakery, checking which shades best fit the lighting and wooden floors.

The clang of pans meant Maisy was already baking, and since Violet had narrowed down the paint options to three, she headed toward the kitchen. “You’ll never guess who I saw running in the park with a gaggle of dogs. After yesterday, I’m planning on avoiding him at all costs, so I totally darted into an alleyway like I was running from the paparazzi, but—”

Violet froze in place, her pulse thumping too hard at her temples. Please, please let me be dreaming.

“But what?” Ford asked from his spot in front of the oven. He wiped an arm across his forehead, and of course the move lifted his T-shirt enough to display a stripe of toned abs and a line of dark hair that led to… well, where hair like that led to. “I’m interested in hearing the rest of that story.”

Maisy stood behind him, her cartoonishly wide eyes making it clear that yes, this was as awkward as it felt and fully warranted the flush of heat. “Ford came by early to check on the oven and ensure it was working properly. Isn’t that nice?”

Mr. Nice Guy grinned. “Pleased to be of service. Violet, maybe I can help you with whoever you’re hiding from. I’m real good at hide and seek.”

“Wrong,” Violet muttered. “You’re not very good at the hiding part. Not only are you a big dude, you’re freaking everywhere.”

And like this morning, when Violet had seen his long, muscular legs eating up the distance, his pack of adorable dogs in tow, she decided to pretend Ford wasn’t there.
She held the three starred swatches up to Maisy.

“I’d like the bakery to be as lovely as your pastries, but I also don’t want the colors to overwhelm the desserts.” She fanned the cards so the stars lined up and pointed at the varying shades. “This is what I’m thinking of going with for the accent colors.”

Maisy slapped flour from her palms. “As you so nicely pointed out, I’m no good at the design thing, so seriously, whatever you think.”

“Want my opinion?” a rumbly voice asked from right behind Violet, and she jumped, then gritted her teeth at his low chuckle. Why had she thought about this guy way too many times since yesterday evening?

“Nah.” She gave his outfit a pointed look. “Matching isn’t your strong suit.”

His jaw dropped, but then he laughed, the noise cracking the ice around her heart.

,Honestly, his outfit was like him. Sporty. Male. Something she shouldn’t be staring at.