MONSTER IN THE MOONLIGHT releases October 20

A bargain for a soul, a cursed sickness that claims the body, and an immortal monster sent to collect the intended victim.
I’m dying. I know it with every fiber of my being. For the past three weeks, a mysterious illness has wreaked havoc in my life, and the doctors can’t figure it out.
When a handsome stranger shows up at my farm the day of the fundraiser for my medical bills, I assume he’s here to give a donation. I don’t know why, but I feel connected to the brooding man with pale eyes, dark hair, and full lips shaped in a constant frown. Being around Ellister makes me forget I’m sick. He looks at me like I’m beautiful, he reminds me what it’s like to want someone so much it hurts, and I find myself wishing I could keep living just so I can continue getting to know him.
But the more I learn about him, the more I start to believe his intentions aren’t pure.
Maybe he didn’t come to save me. Maybe he’s here to take everything I have.
And, foolishly, I just might let him.
Please Note: Monster in the Moonlight is not a standalone novel. The conclusion to Hannah and Ellister’s story can be found in Magic in the Moonlight.

BOOK 2: MAGIC IN THE MOONLIGHT releasing November 10
A twist of fate, the meshing of souls, and a desperate man willing to do anything to save his mate.
To a mere human like myself, Ellister’s powers are unfathomable, and he’s using them to his fullest ability to ensure my survival.
Even before he found out why we’re so drawn to each other, he was willing to do anything to change my future. And now that he’s realized just how entwined we are by destiny, he’s determined to travel to the past and rewrite history. He’ll cross impossible barriers and break every moral code, just so we can be together.
But the fight for my life isn’t over. Because history has a way of repeating itself, no matter how far you go back in time.
Please note: Magic in the Moonlight is not a standalone novel. Monster in the Moonlight should be read first. 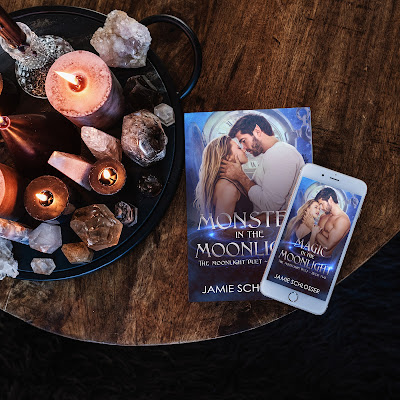 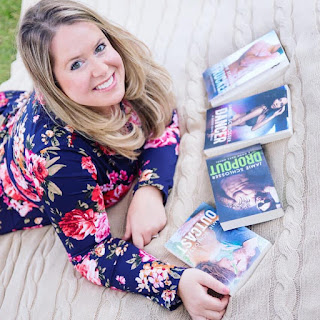 Jamie Schlosser writes new adult romance, romantic comedy, and fantasy/paranormal romance. When she isn’t creating perfect book boyfriends, she’s a stay-at-home mom to her two wonderful kids. She believes reading is a great escape, otters are the best animal, and nothing is more satisfying than a happily-ever-after ending.

To learn more about Jamie and her books, visit here!
Hosted By