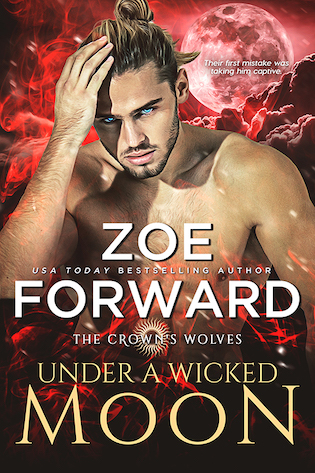 Lycan Ky Lanzo is bound by the Crown’s command. His latest mission directive was deceptively simple. Get yourself caught. Now, Ky’s been bound, drugged, and collared by an unknown enemy in a facility that knows enough about him to neutralize his lycan strength and his telekinetic magic. But he’s not alone in his cell. Because there’s someone else with him. Someone exquisite. Someone altogether forbidden…

For Vivi Kinley, another month gone by means another full moon trapped in a cell with a moon-crazed lycan. There once was a time I’d never kill a living creature. Only, Ky is different. He’s powerful, latently sexy…and wanting him is dangerous trouble. Because sexual attraction is exactly what their captors want—and it’ll be an icy day in hell before she’ll allow it.

Now, Vivi and Ky have one chance at escape and to discover what twisted organization did this to them—and make them pay. The good news is that Ky might have found his near-impossible lycan mate. The bad news is that she might be programmed to kill them all…

He was alone on this mission; there was no backup—no brother talking into an ear communicator, waiting in the wings to rescue him if things passed beyond what he could handle. Like right the fuck now.

What he wouldn’t give to call in this soup sandwich and get backup. He wanted out.

Ky had broken the brothers’ unwritten rule in doing this solo. The Lanzo brothers worked as a team. Flynn did tech. Ky did weapons and analysis. Roman, their designated leader and eldest brother, worked magic. Their youngest brother, Shane, died a few years ago. Roman would go nuclear on Ky when he found out he’d gone on a mission alone, even if he might understand he’d been under the King’s command.

The second he got a chance, he’d contact Roman or Flynn. Bad news was, none of them carried cell phones for fear of being tracked. Old school, for sure.

That scent of her… Christ, he was in trouble.

I will not get involved with someone like her. Not with a woman who, within a few minutes, evoked a whole lot more than a drive for easy sex—like the desire to protect her, know her, and even hear her speak.

Buuut… He relished sex and could imagine a whole hell of a lot with her. Even he had a breaking point.

The lycan female stared at him from her perch across the room, wary and antagonistic.

“Stop stressing. You’re not my type,” he managed to rasp out.

“You’re a shitty liar. You’ll try to get close because you can’t resist, but you won’t succeed. Did you have moon- madness serum on board before they brought you in?”

He nodded, not that it’d be much good with her like this. The serum dulled the cravings. It didn’t cure them. “You’re safe from me.”

They watched each other for an indefinite time, gauging each other’s resolve. 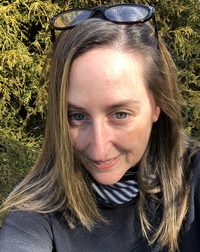 You can find her residing in the South with a menagerie of four-legged beasts and two wild kids.