Release Date: February 21
Five years ago, Dante Carelli made a deal with the devil…
It cost him everything—his brother’s freedom, his family’s trust, and the only woman he ever loved, Kat Harrell.
To save him from himself, and his family’s enemies, Dante was hidden away in Italy, regretting his every decision, and praying for a chance to make amends.
Now he’s back, and ready to atone for every heart he broke, especially Kat’s.
There’s no one Dante won’t take on to free his family from the clutches of the Mafia. But it’s a battle he can’t fight alone. He needs a hacker, someone with skills sharper than his. Someone with grace under fire and ample cunning.
He needs Kat. But how can he fight the enemy and still keep her safe?
Kat Harrell doesn’t need Dante’s protection. The expert hacker can take care of herself, and the last thing she wants is to be back in Dante’s tangled web. Besides, Dante is the past.
There’s nothing left for Kat there.
So why does the air thicken every time he’s around her? And how can he still make her laugh and blush like he did when they were kids?
But the people they love have wrapped themselves in a knot of danger, and neither Dante nor Kat can unravel it alone. They’ll have to work together to save those they care about–whether they like it or not. Because when you play games with the devil, there are no rules.
Only consequences. 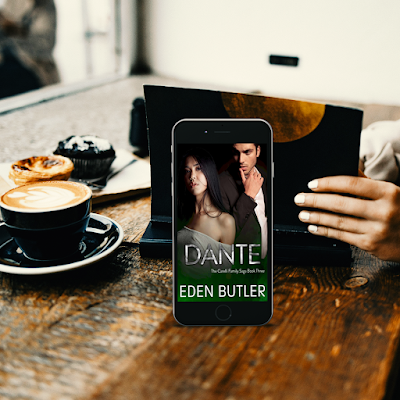 Eden Butler is a writer of contemporary, fantasy and romantic suspense novels and the nine-times great-granddaughter of an honest-to-God English pirate. This could explain her affinity for rule breaking and rum.
When she’s not writing or wondering about her possibly Jack Sparrowesque ancestor, Eden patiently waits for her Hogwarts letter, reads, and spends too much time in her garden perfecting her green thumb while waiting for the next New Orleans Saints Superbowl win.
She is currently living under teenage rule alongside her husband in southeast Louisiana.
Please send help.

To learn more about Eden and her books, visit here!