Falling for my Secret Santa from various authors!

Fall in love with new holiday romances that will warm your heart and make you believe in the power of the season. With 6 authors and 6 completely unique stories, this is the perfect book to curl up with!

The holidays are about family and friends, but it’s also about finding love. Perhaps even with your Secret Santa.

If you’re looking for something fun, flirty, and festive this season then look no further than Falling for my Secret Santa!

Take a break from the stress of the holidays with this collection of 6 holiday romances!

Chloe
Moving back to my hometown is the last thing I want to do after the way I had to leave.

As a single mom and journalist, things are… challenging. To say the least. The stress of tight money and having nobody to help raise my five-year-old son is nearly enough to drown me some days. But I just landed an amazing new job at the New Orleans newspaper, and things are looking up. The only drawback is that everything about my old neighborhood is different.

Everything except for Luke, my ex-best friend’s brother-in-law. He’s exactly the same guy he was when I left while he was still sleeping after our one-night-stand six years ago.

When I bump into him at a wedding I’ve been assigned to write about for the society pages, it’s obvious that he wants a repeat of that hot holiday night. And then I get much more than a story.

More than I ever bargained for.

Luke
I seriously thought she was gone forever.

No, really, I’ve been in love Chloe since I was a kid, and the one time I got to do everything I ever dreamed of with her, she was gone before the next morning. I never saw her again.

Until the wedding of one of my Marine Corps buddies, when she just magically reappears. And then, it’s time to finish what we started all those years ago. The holiday magic is working in my favor when I find out she’s living in my neighborhood again, and I must be at the top of Santa’s Nice List.

I can’t go there yet. I have to earn her trust first, and the weird bruises that keep popping up on her body are only making everything more suspicious.

And when she starts randomly fainting?

Oh yeah, it’s going to take some serious work to sort out this hot mess.

Lucky for Chloe, I’m exactly the guy for the job. She and her son are going to be just fine, I’ll make sure of it.

But Chloe and me?

That’s going to take some serious Christmas magic, and I can only hope that the truth brings us back together instead of tearing us apart forever.

ONE-CLICK YOUR COPY NOW FOR ONLY 99 CENTS.
FOREVER FREE IN KU.

She’s running from her deadly past.

Here in New Orleans, I’ve got a lot of labels.

Most eligible bachelor… famously decorated Marine Corps sniper… notorious gambling playboy… gentleman rake, which happens to be my mother’s personal favorite, but I digress. You know. The usual stuff.
But everything I’ve built my reputation on changes with one night when I set my sights on a sexy, mysterious redhead for a one night stand and wind up with way more than I was betting on.

I have to get out of here.
I can’t live like this anymore, and no, I don’t want to talk about it. All I have to do is disappear. I just have to get out of this god-forsaken city of endless nightmares, and all I need to escape is an unsuspecting man who has a bed and a fast car.
And in a touristy Irish bar in the French Quarter, that unsuspecting man finds me.
Brennan is very accommodating. He wants to give me everything during the little fling I convinced him we’re having. But after only one night of unadulterated passion and pleasure, I can already tell he’s a problem.
I can already tell he’s going to figure out my deep, dark, secret. The secret written all over my body in bruises and injuries that I can’t hide from him.
He wants to know everything. I can’t say a word.

And now, he’s got bookies breathing down his neck, and I’ve got thugs trying to kidnap me, and we’re on a collision course with Hell itself, buried in the sinister underworld of New Orleans.

I have no prayer of escaping without Brennan’s help. But it’s going to cost me something that’s already been destroyed a thousand times already.

In a game of chance, it all comes down to the luck of the draw. And I can only pray that I drew a good hand.

ONE-CLICK YOUR COPY NOW FOR ONLY 99 CENTS.
FOREVER FREE IN KU.

Blood Duet: The Complete Series by Maria Luis is 99c!

The words are tattooed on my skin just as they’re branded on my heart. But I never planned for Lincoln Asher—he’s older, dangerous. Tempting. He won’t stop until I’m his but I’m not his to own.

I vow to never bow before a man.

And he will be my downfall.

The rules were simple. Keep my hands off his daughter and stay out of trouble.

But now I’m stuck with her. There’s only one bed. And well, rules are made to be broken.

I’m the face of professional bull riding—the golden boy. Or at least I was, until it all blew up in my face. Now my agent says I have to clean up my image, so I’m stuck with his ball-busting daughter for the rest of the season as my “full-time supervision.”

But I don’t need a goddamn babysitter, especially one with skin-tight jeans, a sexy smirk, and a mouth she can’t stop running.

A mouth I can’t stop thinking about.

Because Summer isn’t just another conquest. She sees the man behind the mask, and she doesn’t run—she pulls me closer, even when she shouldn’t.

She says this means nothing.

I say this means everything.

She says there are boundaries we shouldn’t cross. That my reputation can’t take any more hits—and neither can her damaged heart.

I say I’m going to steal it anyway. 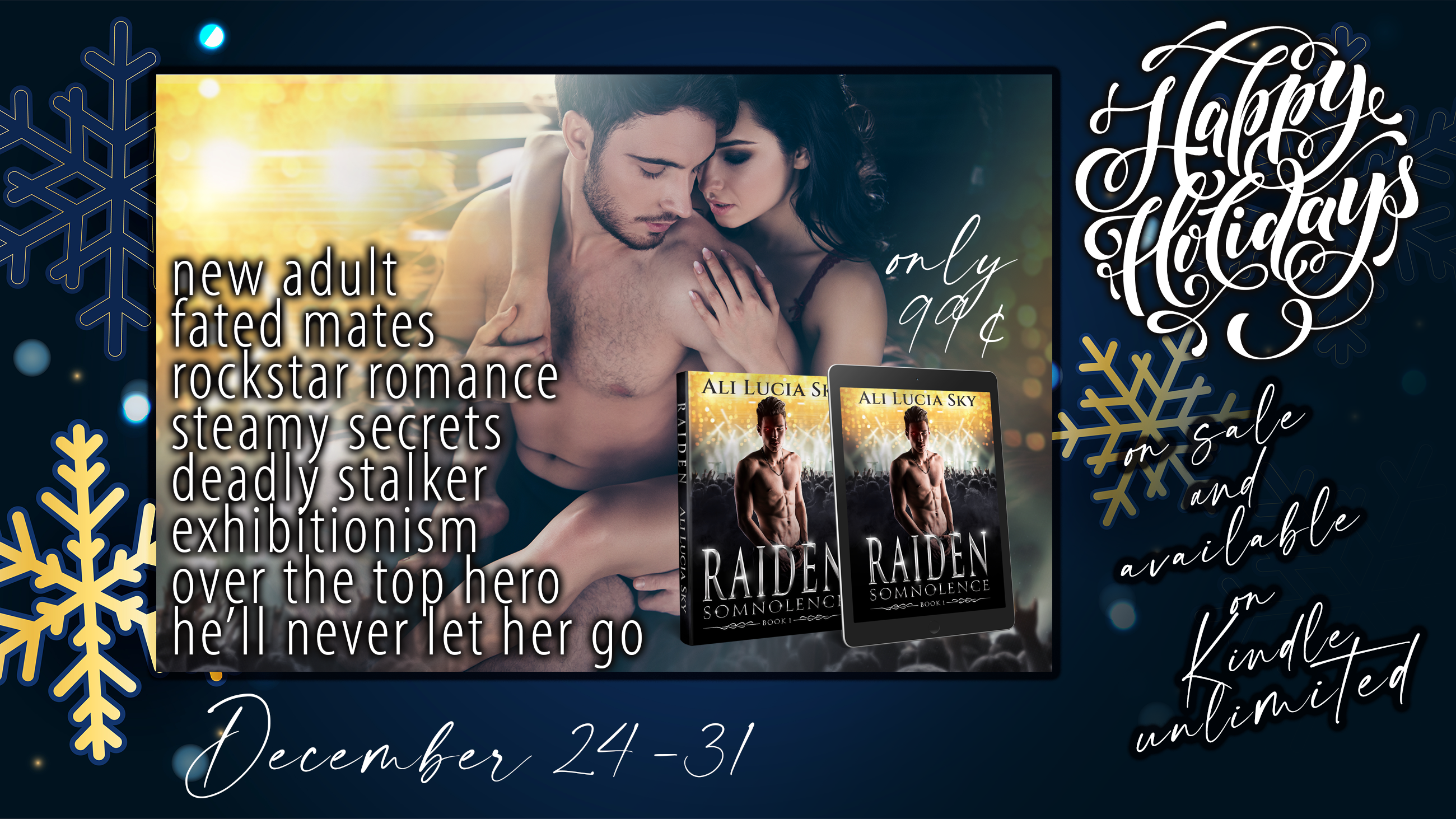 RAIDEN is on sale right now until December 31st for only 99¢!

I never expected to see my favorite rock band standing in the office of my high school getting their schedules. Kids my age aren’t known for touring the world and making music for the masses, but Somnolence is.

They welcome me. Raiden takes me in, loves me… it’s like a dream. Until darker forces, nightmares, and their own dark appetites come for me.