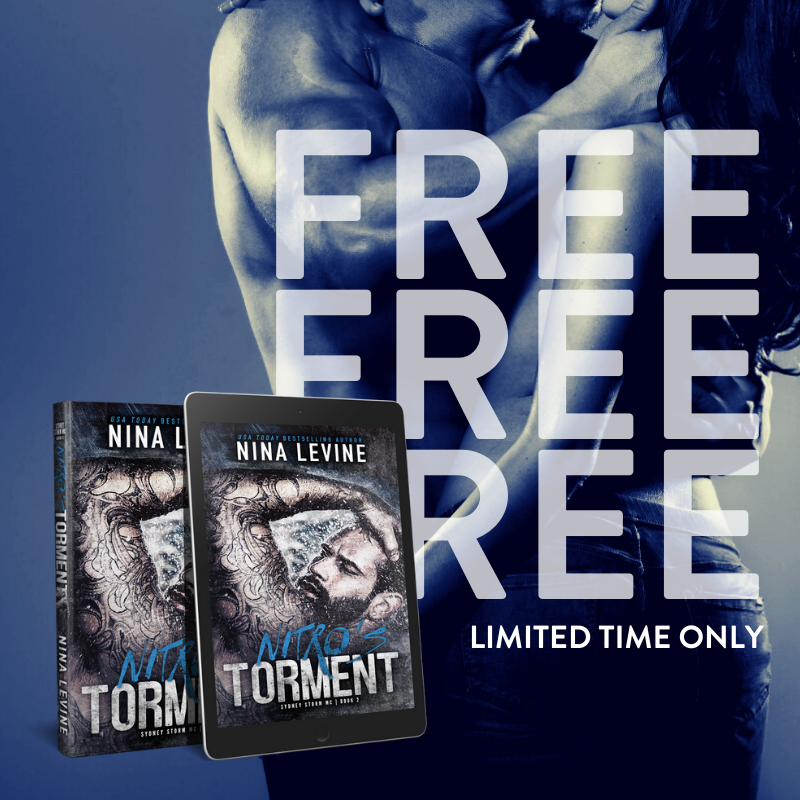 The Sydney Storm MC are back and war is coming.

Nitro’s Torment takes the Storm MC to a new level.
Dark, gritty and fast-paced, this book is an adrenaline ride right to the very last page.

Tatum Lee is a pain in my ass.
She’s stubborn, full of attitude, and she doesn’t like to do what she’s told.
And yet, at a time when I should be focusing on the war my club is in, she consumes my mind because she’s also fearless and fierce, and I’ve never met a woman like her.
The thing about war, though, is the minute you let your focus drop, your enemy rises up and attacks.
And sometimes they bring you to your knees in ways you never imagined.
The other thing about war?
You learn just what you’re capable of doing to protect those you love.

This story contains all the panty-melting sexiness and alpha goodness that my books are known for.

** This book is the second book in my Sydney Storm MC series and is a standalone romance, but just like all my MC books, the club business is ongoing through the entire series **

Meet cute at the dog park, have a hot and sexy hookup, never see each other again.

Things didn’t go quite like I was hoping. I met the fine Irishman in the park, but the rest of my plans were upended by an extremely inconvenient break-in.

My record label isn’t thrilled that the lead singer of their new, biggest band might have a crazed fan or angry ex out for revenge, so they hire a bodyguard to protect me.

That sexy Irishman from the dog park? His name is Ronan Walsh and he’s now my big, bossy bodyguard.

The only place I give up my control is in the bedroom.

The spark that was there when we first met hasn’t gone out. Each time we clash, it adds another splash of gasoline to the flames, until we combust.

It’s even better than I imagined.

But Ronan’s still a bossy suit and I’m a rock star who refuses to be tamed. We make no sense. Then again, sometimes the best things are the most unexpected.

Ronan says I’m his to protect, but I’m beginning to think I could just be his. That is, if the danger lurking in the background doesn’t get to me first.

Get it here: Falling in Reverse

Navy SEAL Lucas Trammel is prepared for everything…except falling in love.
Hell, ask him to take out an al Shabaab enclave full of terrorists and he’s your guy. But love? Yeah…clearing a minefield is less dangerous. From day one, Emma Janssen has been an unwelcome temptation. Those soft curves, her thousand-watt smile…Did he regret that weekend? Hell no. But black ops and civilians don’t mix. He walked away for her own good. Now her life is at risk and she needs him.

And this time he’s not walking away.

He dumped her…broke her heart.
Seriously? He thinks he can waltz back into her life like nothing happened? Like she hadn’t lost her mind in his bed and her heart in his arms? No Way. Oh, she isn’t stupid—he owes her and she’s in trouble. So, she’ll accept his assistance. But with conditions…no touching, no kissing, no swaggering around the house in loose jeans and tight t-shirts.

And this time she’s keeping her heart under lock and key.

Maxim Koslov, a deranged crime lord with a tormented past, is more than willing to deliver the dose she needs.

But when lust becomes obsession, Frankie begins to realize that there is only one way out of this dangerous game of Russian Roulette…

This is a dark romance.

Get Submit for FREE

What does an almost middle-aged guy like me have in common with a young woman who was never allowed to grow up?

Not much… Other than death.

Greer accepts responsibility for taking life for granted. But the weight of others’ expectations leaves her existing in the past. She stands on one side of a deep chasm, tied down by regrets that highlight a bleak future.

When Greer needs a lift, I recognize our histories are strikingly similar, and I’m struggling as much with being left behind by the people I held dear. But can two lonely hearts bridge the gap together and find a promise for tomorrow?

He would kill for her.

Luka Lutrova gets his hands dirty for a living.
The second son of the Lutrova Crime Family, he wants nothing more than to keep his family safe — by any means necessary.

Then, he saw her.

Sofia Zappia, the reluctant bride of his enemy.
They can’t be together. They can never be together, but when Sofia asks for his help, he can’t resist her.

Sofia plays a dangerous game. One that promises to bring about her family’s downfall… and threatens to tear his family apart, too.

But if Luka can’t have her, no one will…

Their lives are on the line. So are their hearts…

Captain Penn Sullivan was no stranger to deadly conditions. So, he’s more than ready to chase an elusive drug trafficker through the Alaskan wilderness. But nothing could’ve prepared him for his untimely attraction to the beautiful, bossy bush guide who claims to know the land better than his military GPS.

Cora doesn’t need a special ops unit with more muscles than brains to find the hijacked plane. She’s perfectly capable of figuring out where it went down on her own. But that doesn’t mean she can’t appreciate having a strong, sexy guy like Penn around to keep her warm on the frigid mountainside. When the mission goes sideways, it’s not long before Penn and Cora realize they’ll do anything to keep each other safe. Even if it takes extreme measures…

Hitting Xtremes, book 1 in the Xtreme Ops series, is a steamy, hard-hitting romantic suspense read full of action, danger, and passion. It features a strong, capable heroine and the tough military hero who steals her heart. Happily ever after guaranteed. Download today and get ready for the adventure of a lifetime.