Hard to Handle, book one in the Play Hard series, an all new series of standalone books by New York Times bestselling author, K. Bromberg, is LIVE!

At first, the request seemed simple—sign a new athlete to the agency.
Then I found out the new athlete was none other than the most wanted man in hockey today: Hunter Maddox

Gifted. Sexy. At the top of his game. And the only man who has ever broken my heart.
If signing him will help save our family business, I’ll swallow my pride and do what’s asked.

But when it becomes clear his uncharacteristic antics off the ice are a hint of something deeper, keeping things strictly professional between us becomes more than complicated.

But I know better than to cross that line.

I’ll never date a client. Not even for him.

***
Win the Stanley Cup and do it before time runs out.

Not a small feat, but it’s what’s motivated me since the start of my career.

And time is running out.

Feisty. Dogged. Damn gorgeous. The one I let get away.

I have no idea why she’s traveling with the team, but hell if resisting her is going to be easy.

But I have a job to do, and I refuse to lose sight of that end game. Even if she confuses me. Even if she sees parts of me I’ve hidden from the world.

I can’t lose focus. Not even for her.

I stare at Hunter. At his shirt plastered with sweat and how it clings to his body, despite the chill of the ice his skates are standing on. He has his warm-up pants on and is without a helmet, his hair curling at the ends from the sweat.
And all I see in his eyes is anger I didn’t put there. Or maybe I did. Rejection can do that to a man . . . but there’s something more here. Something I walked in on that doesn’t make sense.
“Don’t give me that look, Kincade,” Hunter mutters as he skates over to the penalty box where his electrolyte drink sits.
“What look?” I ask.
He half laughs, half snorts and meets my gaze across the distance. “Disappointment. Disproval. Disdain. I’m the king of all of them, so save your breath—or in this case—your glare, because it’s not going to work with me.”
“Are we working on emotions that start with the letter D today?” I ask. A hint of my embarrassment and anger over how I acted last night creeps into my voice, but I mask it with sarcasm. “If that’s the case, I’m more than impressed with your answers thus far.”
He clenches his jaw in response and then skates back over to line up more pucks so he can shoot them. And he does, one after another, each shot taken with laser precision and a healthy dose of fury behind it.
He goes through the first ten lined up and then stops to catch his breath.
His talent and skill are undeniable, but so is the beer bottle in my hand.
“Just because you’re the captain and star of this team, doesn’t mean management won’t frown upon this,” I say, unable to let this go.
“Screw the management.”
“No one likes a player who’s hard to handle and honestly, Hunter, you’re becoming hard to handle.”
“No one likes unsolicited advice from someone who has no bearing on his career, either,” he counters, the rebuke stinging but deserved.
The problem is, I do care about him. Doesn’t he get that’s where my hostility stems from?
And only a crazy person would say that, Dekker.
I put my hands up in surrender to both him and my own thoughts. “You know I only want the best for you.” I take a few steps in his direction in the first row of the stands. I’m close enough to catch the hitch of his movement and to see uncertainty flicker in his eyes. It’s almost as if he needs to talk but doesn’t see me as someone he can trust. I hate that. “What is it, Hunter?”
“Nothing. It’s . . . never mind.”
But I see it, and he knows I see it. The question is what do I see, though?

Wow! This was an emotional heart twister! I loved the premise of this new series by one of my favorite authors. Four sisters working with their father in his sports management company. All different but kickass in a man’s world. (Didn’t really care for their names though.) Their father’s decides to steal clients from their biggest competitor and sets up the oldest sister, Dekker, to go after the biggest hockey star and her former friends-with-benefits lover, Hunter “Mad Dog” Maddox. She fell for the closed-off hottie and decided to cut and run before she was really heart broken. Three years later and Dekker and Hunter circled round and round with words and actions that lead to nowhere and to each other. The emotions were high as each dealt with loss and grief. Hunter’s is still ongoing and affecting every part of his life, especially his star-studded hockey career. It looks like he is imploding at the wrong time. On the cusp of playing for the Cup and living out a life-long dream for his twin brother as much as for himself. His twin is his other half that never got the chance fulfill his dreams or live a full life. So much sadness. But the real sadness is in Hunter’s dad’s rejection of the son still standing. Their relationship was emotional overload for me. Sometimes it seemed like Hunter was still in his teens rather than a thirty-two year-old man that needed to let some of the pain go. Dekker’s fight to help him was terrific. What a spirited heroine so full of caring and sympathy. And what a hot pair of sexiness they are. Sizzling! I really got into the story when this luscious pair settle into a relationship that I could get on board with. Finally, they were communicating on all levels. I was rooting for the hockey star to fulfill his destiny and get the girl. The final resolution was no surprise but I loved these characters. The hunky, tortured Hunter and the smart, sexy Dekker, along with the Kincade sisters. Those girls could love and fight in equal measure. I can’t wait for the next story in the sexy new series! 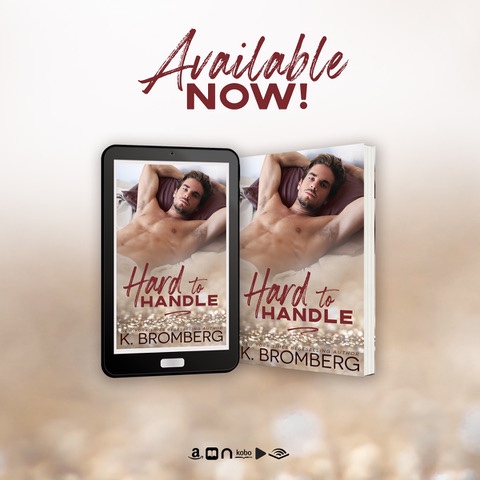 New York Times Bestselling author K. Bromberg writes contemporary romance novels that contain a mixture of sweet, emotional, a whole lot of sexy, and a little bit of real. She likes to write strong heroines and damaged heroes who we love to hate but can’t help to love.

A mom of three, she plots her novels in between school runs and soccer practices, more often than not with her laptop in tow and her mind scattered in too many different directions.

Since publishing her first book on a whim in 2013, Kristy has sold over one and a half million copies of her books across eighteen different countries and has landed on the New York Times, USA Today, and Wall Street Journal Bestsellers lists over thirty times. Her Driven trilogy (Driven, Fueled, and Crashed) is currently being adapted for film by the streaming platform, Passionflix, with the first movie (Driven) out now.

With her imagination always in overdrive, she is currently scheming, plotting, and swooning over her latest hero. You can find out more about him or chat with Kristy on any of her social media accounts.